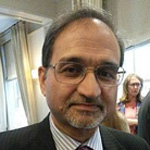 Dr. Shekhar Saxena, MD, FRCPsych, DAB, MRC, Psych, since 1998 has worked at the World Health Organization (WHO)[1] and since 2010 has been the Director of the Department of Mental Health and Substance Abuse (MSD) at World Health Organization‘s Headquarters Office in Geneva, Switzerland.[2] He is recipient of the 2017 Leon Eisenberg Award. In September 2018 he will join the Harvard T.H. Chan School of Public Health as Visiting Professor of Global Mental Health in the Department of Global Health and Population.

Before joining WHO in 1998[4] and moving to Geneva, Saxena served as a clinical psychiatrist to patients in Delhi, India.[5][6] One of the organizations he worked for was the All India Institute of Medical Sciences.[7] He has worked with many major European and North American research and academic institutions, including the National Institutes of Health (NIH) and National Institute of Mental Health in the United States and has been interviewed widely on television and radio, including NPR.[8] In 2010, he was appointed the Director of the Department of Mental Health and Substance Abuse.[7]

Some of his work involves the prevention and management of mental, developmental, neurological, and substance use disorders, and suicide prevention.[9] At WHO, he also led the implementation of the organization’s mental health Gap Action Programme.[10]

On May 9, 2017, he received the 8th Annual Leon Eisenberg Award at the Harvard Faculty Club in Cambridge, Massachusetts.[11] In June 2018, after 8 years, he stepped down as the Director of the Department of Mental Health and Substance Abuse at WHO.[12]

He is scheduled to speak to the 3rd Global Conference on Health and Lifestyle at Loma Linda University in Loma Linda, California, July 9–13, 2019.